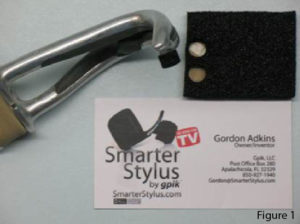 Recently I was challenged by one of my patients from another country, who lost both his hands, to make one of his myoelectric prosthetic hands work with a touch screen phone. I am sharing this story as what I learned can benefit others who use upper extremity prosthesis.

While shopping in a mall, someone had shown my patient touch pads that could attach to a winter glove enabling phone use without taking the glove off. We ordered the touch pads online but were disappointed to find out they would not work unless the other end of the pad, which is metal, was touching skin under the glove. Attaching the pads to his vinyl glove on his prosthetic hand would not operate his phone because he had no skin under it.

I contacted several people and manufacturers to see if there was anything available to make a prosthetic hand work with a touch screen but they couldn’t help me. I informed my patient of this and he said he knew I could figure out away to make it work and he was not going home until I did! 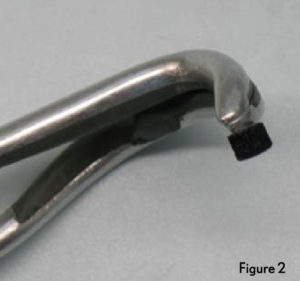 Stylus for those who use a Metal Hook

About that time I was informed about a new creation by inventor Gordon Adkins. He designed a inexpensive round, conductive rubber material, called a Smarter Stylus, that stuck to your finger and enabled you to more efficiently operate your phone. He also referred to it a disposable stylus as when it was no longer sticky enough to stick to your finger it could be thrown away.

It was brought to my attention because it would work well for upper limb amputees as they could stick it to their metal hook terminal device and operate their phone also.

Stylus for those who use a Hand

The Smarter Stylus was perfect for those who used a metal hook terminal device but what about those who use a hand. Apparently the metal is what made it work. 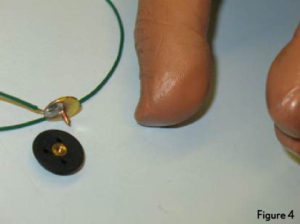 I went back to the original product I had ordered, the Digits, invented by Brian Shy. Through trial and error I found that I could solder about a 14-inch or longer wire to the inner metal part of the touch pad (Figure 4) and it would then operate the touch screen phone. It could then be attach it to the thumb of the prosthetic glove in thesame way it was designed to be attached to a winter glove, then installed on the myoelectric hand

. The Digit Stylus and wire didn’t interfere with other hand functions and the wire could be wrapped around the wrist, out of site.

My patient with the myoelectric hands could now use his touch screen phone as he desired and he could return home happy.